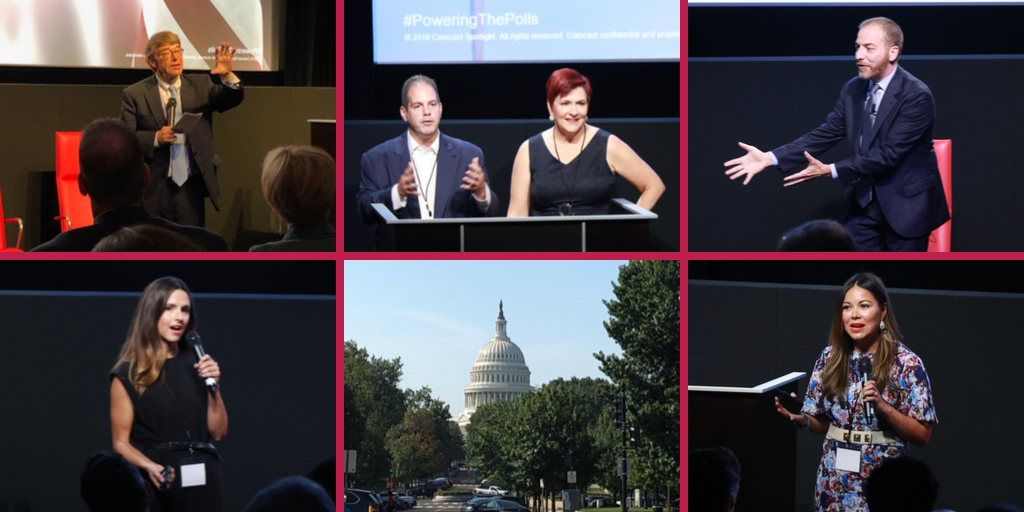 There’s no silver bullet for winning political elections. But the research suggests that if there is anything close to a silver-bullet for political campaigns, its TV advertising. And in 2020, campaigns need any advantage they can get to come out on top.

Last month, our clients and friends in the political community gathered in the NCTA headquarters to hear from our nation’s top political analysts – Chuck Todd and Charlie Cook – about the greatly anticipated 2020 election season and from advertising industry leaders on best practices for how to succeed in 2020.

After hearing from Cook and Todd and speaking with a who’s who of political agency and consulting players at Powering the Polls, we determined there were two emergent themes from the day:

Regardless of what you think about our current President, it’s a fact that folks on both sides of the aisle have strong opinions and feelings about him. Cook and Todd believe that those strong emotions led to the highest voter turnout of any midterm election since 1914 last year, and they expect those feelings will continue to drive people to the polls in 2020.

“Interest in September 2019 is at levels you’d expect to see in September 2020,” Todd told Powering The Polls attendees. “Voter turnout in 2020 may be the highest in history,” Cook added.

So what does this mean for political campaigns?

Cook and Todd recommended against a recent trend among some campaigns to focus nearly all efforts on bringing out the base while ignoring swing voters. This strategy could work in unique scenarios, but the analysts warned that winning over swing voters would be crucial in 2020. Additionally, the analysts suggested that “repetition is key.” Targeting voters early and often is important to truly drive your message home.

And the data backs it up. More on that below.

If there’s anything that political advertisers can take away from the 2018 election results it’s this: Data-fueled TV strategies correlate to higher win rates.

Effectv recently analyzed numerous political campaigns and compiled the results of that analysis, as well as best practices, in a recently-released eBook called “Winning TV Strategies for Elections.”

Effectv’s Andrea Zapata and Catie Birmingham presented the findings at Powering The Polls, which can be summarized in these three best practices for political advertisers heading into 2020:

Today, insights from data and smarter advertising tools enable advertisers to create more efficient schedules that reach the audiences that can sway the election. Media buyers can now base advertising decisions on insights such as whether a network or show’s audience is likely to vote or support certain platforms.

No matter the breadth or granularity of a target, campaigns can strategically reach an intended segment on cable.

In The New TV environment, there’s no need for guesswork: at Effectv, the data shows us there’s tremendous opportunity to reach voters outside of primetime and the top news shows.

Perhaps more interesting is that almost 20% of households never watch news1. These are people who just want to be entertained and stick to the BETs, Bravos, and FOX Movie Networks of the world.

Election results show a correlation between earlier start dates and overall win rates. While the majority of advertisers (68%) were on air for six weeks or less, winning candidates averaged 12 weeks of air time.2

These differences in duration and frequency can add up. On average across the duration of the election cycle, winners’ ads aired 64% more times than losers’ ads.3 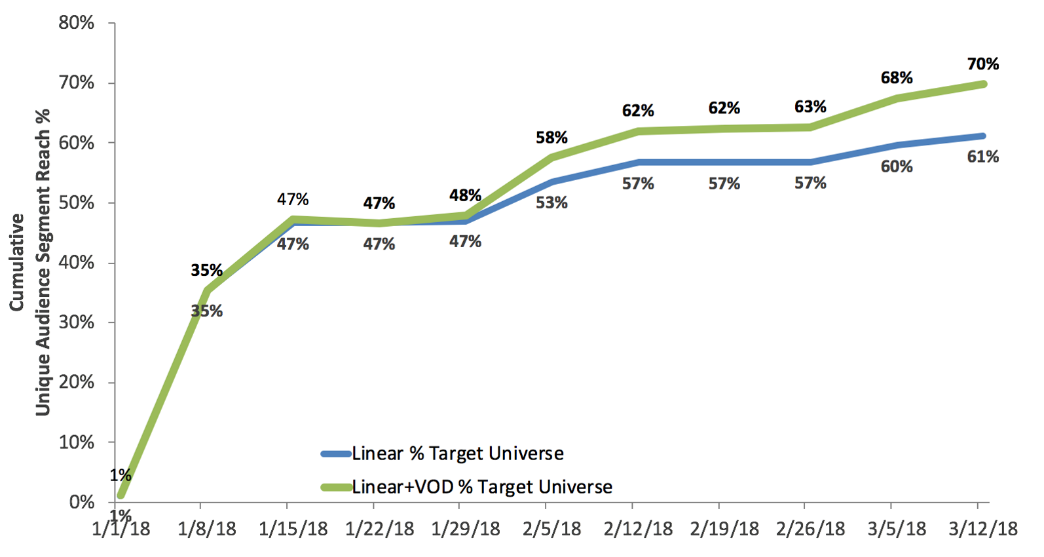 Advertising on multiple screens drives incremental reach. In a 2018 campaign, a candidate’s linear TV campaign was able to reach 35% of their target audience within the first week of airing.4 However, the campaign started to flatten midway through, and the addition of VOD helped continue to build reach, reaching 70% of the target audience by the end of the campaign.4

When the total campaign reach is broken out, 75% of Comcast households were reached through the linear campaign only and 17% were reached exclusively through VOD4. Only 8% of HHs were exposed to the campaign on both linear and VOD.4 This shows that VOD was not merely a frequency driver, but actually increased the overall reach of the campaign.

To say that we’re excited for 2020 is an understatement. Effectv has the viewership data, solutions, and next-generation tools to efficiently and effectively reach candidates’ target audiences. While TV has changed, it’s still the most powerful channel for political campaigns.

1Comcast Internal Viewership data. News Viewers are homes with regular news viewing of Local Broadcast News (ABC, CBS, FOX, and NBC affiliates) or Cable News networks (CNN, MSNBC, and Fox News). Prime defined as 7P-11P. Non News is any programming not during Local Broadcast News Hours, and not on any Cable News Network. Households that never watch news are homes that did not tune to any news programming during the viewing period. Viewing for October 2018. As of 09/26/2019.

2 Comcast Internal Advertiser Campaign data matched with Ballotpedia Results for 2018 Federal Election Candidates. Campaign Length represents the length the advertiser was on air with Effectv. As of 09/26/2019.